Portfolio credit risk models are concerned with potential losses due to defaults or deteriorations in credit quality. These models have applications ranging from regulatory and economic capital measurement to portfolio management and risk-adjusted pricing. Incorrectly specified models translate to insufficient capital buffers which, in turn, leave the financial system crisis-prone and in need of regular bail-outs. The robustness of portfolio credit risk models is therefore crucial for banks and regulators alike.

Dependence between default events is one of the key concerns when modelling portfolio credit risk since defaults of many issuers over a fixed period of time can lead to extreme losses. However, modelling default dependence is not a trivial task. The glaring challenge is the multi-faceted nature of default dependence. Models need to account for two distinct channels of risk at the same time. On the one hand, performance of different issuers depends on certain common underlying factors, such as interest rates or economic growth. On the other hand, default of an issuer may, too, have a direct impact on the probability of default of a second dependent issuer, a phenomenon known as contagion.

Existing models focus mostly on dependence due to common factors and neglect contagion. Examples of this approach include the Asymptotic Single Risk Factor (ASRF) model [1], industry extensions of the model presented by Merton [2] such as the KMV [3] and CreditMetrics [4] models, and the two-factor model proposed recently by Basel Committee on Banking Supervision for the calculation of Default Risk Charge (DRC) to capture the default risk of trading book exposures [5]. The ability of such models to explain the clustering of defaults that does occur from time to time has been questioned repeatedly in the literature (se e.g. [6], [7]). Furthermore, evidence shows that episodes of clustered corporate and sub-sovereign defaults generally coincide with episodes of sovereign crises, such as the crises of Indonesia in 1997-2002, Russia in 1998-1999, and Argentina in 2001-2002 [8]. Consequently, the need to consider contagion as an alternative channel for default dependence has become apparent.

The global financial crisis laid bare the downside of a highly complex and interconnected financial system. Through the system’s many links, shocks can propagate rapidly across markets and asset classes. Understanding financial interconnectedness and capturing it with models is a major challenge. Network theory can provide us with tools and insights that enable us to make sense of the complex interconnected nature of financial systems. Hence, following the 2008 crisis, there has been a significant interest in using network-based models for financial stability and systemic risk (see e.g. [9], [10], [11]).

Despite substantial literature on portfolio credit risk models and networks in finance, specifying models, which take into account both common factors and contagion while distinguishing between the two effects clearly, still proves challenging. Moreover, most of the studies on contagion using network models focus on systemic risk and the resilience of the financial system to shocks. The qualitative nature of this line of research can hardly provide quantitative risk metrics that can be applied to models for measuring the risk of individual portfolios.

In our recent paper [12] we took up this challenge by introducing a portfolio credit risk model that can account for two channels of default dependence: common underlying factors and financial distress propagated from sovereigns to corporates and sub-sovereigns. We augmented systematic factors with a contagion mechanism affecting the entire universe of credits, where the default probabilities of issuers in the portfolio are immediately affected by the default of the country of operation. We then constructed credit networks from Credit Default Swap (CDS) spreads and used CountryRank, a network-based metric to quantify the impact of a sovereign default event on the credit quality of other issuers in the portfolio. In order to investigate the impact of our model on credit losses, we used synthetic test portfolios for which we generated loss distributions and studied the effect of contagion on the associated risk measures. Our analysis showed that credit losses can increase significantly in the presence of contagion.

More recently, we introduced a method for estimating contagion effects from CDS data using Bayesian networks (BNs) [13]. A BN is a probabilistic graphical model that represents a set of variables and their conditional dependencies via a directed acyclic graph. We studied an evaluated different algorithms to learn the structure and the parameters of financial networks. We used CDS spreads of issuers in a stylized portfolio and incorporated the results in the model presented in [12]. Contagion was shown to have a significant impact on the tails of the loss distribution and the results were consistent with the ones obtained using the CountryRank metric.

The issues discussed above highlight the need for a dynamic extension of the current modelling framework by accounting for financial interconnectedness. Data-driven methods can be used to estimate contagion effects, which need to be incorporated in the current models for portfolio credit risk. This direction has been taken in [12] and [13]. 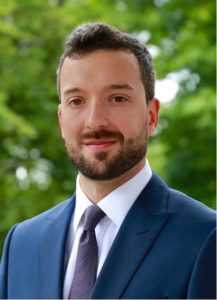 Ioannis Anagnostou is based at ING Groep N.V. 2016-2019, and his research project is Machine Learning Algorithms for Risk Management in Trading Activities (WP4)