“Who owns the information, he owns the world”. This phrase became famous in 1815 when Rothschild family managed to earn about 3 billion British Pounds and became the owners of a large part of the British economy in one day, simply by having a bit more information about results of the famous Waterloo battle than other traders. Today huge companies, such like Google, Bloomberg or Facebook one way or another make their money processing and selling structured information such like political news or users behaviour to other companies and individuals. There is no need to say that these days clear and instantly delivered information is more important than ever. Apparently, there are hundreds or thousands methods and types of information which can be extracted from the big amounts of data. Just a small part of these methods, such as linear analysis or analysis of standard deviations, has been successfully popularized and is simple enough to be ubiquitously employed by scientists. In this short post we will concentrate our attention on two powerful but not very well know concepts which are able to reveal some secrets hidden in the price time series: on specific statistical features of all markets called scaling laws and on the way how to define time used to study market’s data.

First of all, our word is full of surprising scaling laws. The wide range of natural phenomena, from physics, biology, earth and planetary sciences, economics and finance, computer science, and demography to the social sciences inhabited by specific correlations. Just to give an intuition about the importance of the scaling laws let us take a look at a trivial example. Imagine a one room studio apartment which is 5 meters long in each dimension and that we should pay €1000 each month as the rental cost of the room. Now, if we decide to buy a new apartment where each side has double size (10 meters), we get the room the rent price of which is not €2000, which one would mistakenly expect, but €4000, since the square of the floor has been quadrupled. This is a super naive example, but it is pretty much useful to keep this feature in mind if we have a rather limited budget and high rental cost, is not it?

Much more significant correlations dwell the world of science and finance is not an exception to these rules. In 2011 three scientists used a new event-driven paradigm of price behaviour to discover 12 independent scaling laws of high frequency Forex prices which have never been observed before. Some of the laws were so peculiar and ubiquitous, that the discovery gave a birth for several highly promising and seminal research papers. For example, in the work “Multi-scale Representation of High Frequency Market Liquidity” authors presented theoretic measurement called Liquidity which has the ability to detect and predict a crisis in financial markets. Probably, with this early warning signal of severe financial stress, our world economy would not be in so bad shape after the latest global financial catastrophe. Hopefully, by losing a battle we find a new way to win the entire war.

The second interesting topic relevant to the data analysis is the definition of time. For years, financiers used to rely on physical time which is designed to tick with the rotation of the Earth around the Sun, with changes of days and seasons. This time does not take into account the pulse of economic and political events or the general mood of all market participants which can cause unexpected price moves. For example, we cannot predict the number of days between two arbitrary chosen price levels of EUR/USD or how many movements the price will make until the end of the next week. Methods, built on top of this time are not able to accurately describe real market properties and associated statistical features. Hopefully, several alternative approaches were recently developed in order to overcome these limitations and to provide more robust tools capable to extract as much of the valuable information from the price behaviour as possible. One of them is the concept of Directional-Change Intrinsic Time. Shortly, in this event-space case time ticks when the price experiences a reversal of a given fixed threshold from its local extreme. Notably, this new concept helped scientists to make several very impressive instruments for the price interpretation and to show their power in action. For example, authors of the work “The Alpha Engine: Designing an Automated Trading Algorithm” extensively used the directional-change intrinsic time concept and managed to construct an automated trading algorithm which stabilizes the markets and earns money at the same time. This double sides sword attracts attention of not only people from academia by showing an ability to be a powerful risk management tool, but also people from industry who have access to massive financial sources and are able to run the trading algorithm in real conditions. It is worth noting that it has become possible mostly thanks to the deliberately tuned tools and to the proper interpretation of analyzed data.

As it was already said, it is hardly possible to overestimate importance and power of information and of the methods which help us to find pearls hidden in the wide range of data. Here we have given just two examples of very specific approaches of the data processing and interpretation. The described financial scaling laws provide a reliable framework for developing comprehensive risk management tools and represent the foundation of a completely new generation of methods for studying high frequency market activity. Undoubtedly, we should always improve our knowledge and skills in data analysis to improve the quality of the inferences and predictions we make about the price formation. Hopefully, having a rich collection of data analysis and risk management tools we will not allow the next financial crises to irreversibly hurt our current financial system. 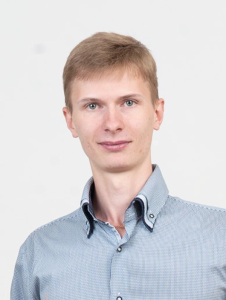 Vladimir Petrov is based at University of Zurich 2016-2019, and his research project is High Frequency Trading Risk Management Tools Based on Scaling Law (WP4)